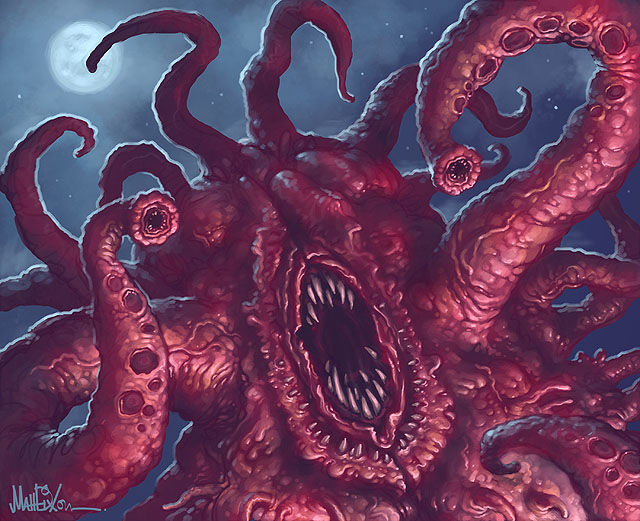 Invisible (before feeding)
Red (after feeding)

Robert Bloch
Star Vampires are strange, blood-sucking, usually invisible creatures from beyond space that were described by the medieval sorcerer Ludwig Prinn in his cursed book De Vermis Mysteriis, containing a spell which can summon them.

The Vampires are jellyfish-like creatures with no visible head or facial features other than a huge maw, and bearing several muscular tentacles strong enough to crush a man to death and armed with suckers on the tips through which the aliens drain their victims out of their blood. Normally invisible to the Human eye, the Star Vampires become visible after feeding, as the blood of their victims fill their entire bodies, giving them a vivid red color. They constantly emit a strange terrifying laughter.

Their extraterrestrial nature is inferred from references of them coming from the stars, though their exact origin is unknown, the way they can be quickly summoned could also suggest extra-dimensional nature or abilities.

Add a photo to this gallery
Retrieved from "https://aliens.fandom.com/wiki/Star_Vampire?oldid=199887"
Community content is available under CC-BY-SA unless otherwise noted.