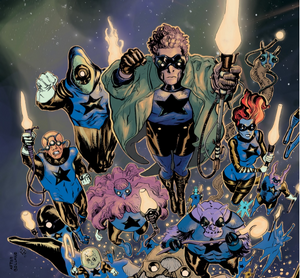 The Star Sheriff Squadron is an universal peacekeeping organization founded by aliens inspired by the 1950s Earth hero Doctor Star.

In 1951 World War II era hero of Spiral City, Jimmy Robinson aka Doctor Star developed a transponder that sent out a signal to contact alien life. His message was received and eager to seek out new life, left his family on Earth on what he believed to be a quick visit and a new chapter in human history.

He encountered a peaceful race of aliens that existed only to do good and had no concept of war. Doctor Star later learned that the aliens were constantly terrorized by a creature known as the Gravity Leviathan. The hero seeing that they needed a protector went out to confront the monster, tracking to its lair, a small world at the edge of a black hole. He defeated the creature, but upon returning home he discovered that due to the proximity of the black hole, time slowed for him while fighting the Gravity Leviathan, whereas days had passed for him, eighteen years passed for the rest of the universe. Realizing that he had abandoned his family Star hurried home leaving the aliens.

Doctor Star who was rejected by his wife and son's family wished to find a cure for his son's cancer. He called the aliens hoping that they could cure him. However he was greeted by the appearance of one member of the aliens known as the Star Sheriff, wielding a Cosmic Wand similar to his own.

The group was aware of Robinson's child's condition but sadly they could not provide their hero a cure, as it was beyond their ability. Despite his loss they offered to share with him the secrets of the Para-Zone.

Retrieved from "https://aliens.fandom.com/wiki/Star_Sheriff_Squadron?oldid=130730"
Community content is available under CC-BY-SA unless otherwise noted.