Alien Species
Register
Don't have an account?
Sign In
Advertisement
in: All Tomorrows Universe, Extinct Species, Mars Inhabitants,
and 17 more 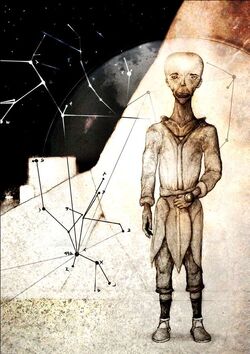 Nemo Ramjet
The Star People are a posthuman species that lived in a united solar system. They are the hybrid descendants of the Martians and the people of Earth.

The Star People were genetically engineered Humans with bigger brains and heightened talents, in every way superior to the humans of Earth and the Martians. While bearing an overall appearance very similar to that of Humans, they bore bald, larger heads to accommodate their larger brains.

The Star People created highly advanced societies across thousands of planets, although individual colonies rarely met in-person. Early colonization attempts were strife with their own arrays of problems, from generation ship crews failing due to loving machines over other Star People. Despite their separate colonies, their communication and sharing of technology allowed all Star People to prosper as a sort of empire of man. While they originally had no armies or weapons, they developed such defensive measures after seeing evidence of other advanced lifeforms. They were known to be quite destructive to the local ecosystems of colony worlds, preferring to replace them with plants and animals created from modified species native to Earth, possibly to create environments more familiar to them.

Aftermath of the civil war[]

The Summer of Man[]