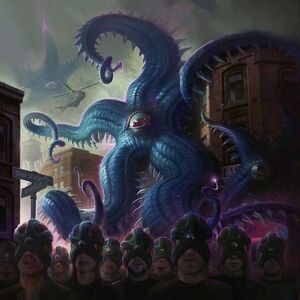 Traditional color is blue, but they do have the ability to change the color of their skin

Gardner Fox
Mike Sekowsky
Star Conquerors, a.k.a. Starros are a race of starfish-like aliens that travel from planet to planet taking over the mind's of the native species.

Before the Star Conquerors were led by Starro the Conqueror, they were a race of nomadic space-borne aliens that acted in a similar way to bees and ants.

It was until a Motherstar landed on the planet Hatorei where a native Hatoreian named Cobi who managed to fight against and disconnect himself from the Starros control and had the Motherstar hatchling latched onto his chest and gained control of the Starro race, to which he used them to conquer the Universe. Claiming the title "Starro the Conqueror".

Retrieved from "https://aliens.fandom.com/wiki/Star_Conqueror?oldid=187714"
Community content is available under CC-BY-SA unless otherwise noted.