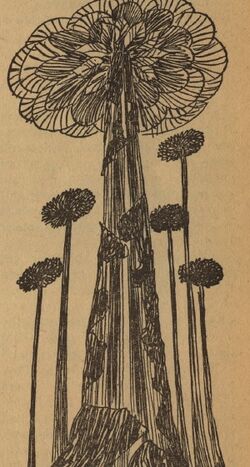 Stage trees are a biogenically altered life form created by the Tnuctip slave-race from one of their native tree species for the Thrint (more commonly known as Slavers) as solid-fuel boosters for their spaceships. The Thrint grew Stage Trees in massive plantations on planets with locations too delicate for the use of conventional fusion drives (which generate exhaust plumes of several thousand degrees) to lift their craft high enough that the main engines could be used without damaging the surface below. We can assume this was done to reduce the cost and that farming the trees was easier and more cost-effective than simply building boosters in a factory. After the fall of the Slaver Empire a billion years ago, the trees became wild and eventually evolved to use their rocket cores as part of their reproductive strategy, though they had ceased to be used regularly by the Thrint several decades before the slave races revolted.

Stage trees have two forms, a shrub form and a tree form, which share several common physical characteristics. First, they have narrow trunks that are technically conical, but taper so slowly as to appear cylindrical. These trunks are gray and smooth to the touch, like polished granite, and are between 1-2 meters tall for the smaller shrub form, and nearly a kilometer high in the tree form, and both are filled with an undetermined solid fuel mixture within a hard outer casing. All Stage Trees have thick, bright yellow vegetation like wooly moss. In the shrub form this takes the shape of a thick mat supported by thin branches at the top of the trunk, much like the head of a dandelion in appearance; the tree forms grow the vegetation out in a mat several meters thick that can extend for just under a kilometer out from the base of the trunk. Lastly, Stage Trees store their seeds at the apex of their trunks in egg-shaped bulbs that look like the heads of an asparagus stalk - their size in the shrub form is unknown, but in the tree form can be at least five meters across.

By some unknown natural mechanism, the stage trees ignite (it could be self-ignition or require a strike from lightning or a wildfire, but it has been shown that they can be set off by burning them or the vegetation around them even when immature) and lift off, burning their solid fuel cores until they reach a tremendous altitude. When a tree form lifts off, it leaves behind its roots and vegetative mat so as to get more delta-V from its fuel - it is unknown how much of the shrub form is shed at liftoff. At the apex of their flight, the shrub stage detonates, spreading its seeds out across a huge area in an extreme form of explosive dehiscence. When a seed reaches particularly fertile soil, it can instead grow into a tree form. These larger forms are where the Stage Tree derives its name as the trunks are segmented into at least two, and possibly more, discreet rocket stages that separate using a powerful detonation during flight. When ripe, the tree form lifts off and usually reaches escape velocity for its host star system. The seed pods hurtle through space for hundreds of thousands of years before reaching a new solar system where they detonate, spreading the individual seeds widely to maximize the chance one will land on an inhabitable planet or moon. In this way, the Stage Trees have colonized worlds across a 20 light-year diameter irregular bubble.

Summary of A Relic of the Empire on larryniven.net with other related links.