"Congratulations, Reg. It's a... squid."
―Agent K on the birth of Redgick's child 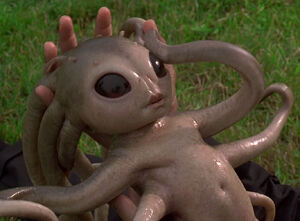 Squids are a race of sapient, cephalopod-like alien beings, some of which are known to live covertly on Earth, possibly as galactic refugees. Only their infants have been seen undisguised and judging from their appearance this is a slimy brown-skinned species with large black-eyes, semi-humanoid anatomy, multiple tentacles and, oddly, a mammalian-style navel.

Apparently, giving birth can be a violent experience for this species. In the case of Redgick's wife at least, she extended a huge tentacle from her body and proceeded to attack Agent J, who was attempting to help her with the delivery.

Retrieved from "https://aliens.fandom.com/wiki/Squid_(Men_In_Black)?oldid=184552"
Community content is available under CC-BY-SA unless otherwise noted.