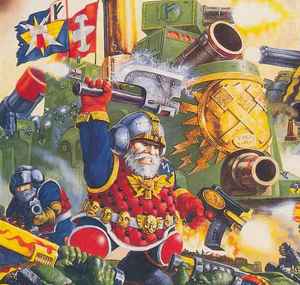 Warhammer 40,000
The Squats or (Homo Sapiens Rotundus) were an offshoot of humanity in the 41st Millennium.

A short, stocky and tough humanoid species, their average height was 1.4 metres.

Squats were the descendants of human colonists who colonised the worlds around the galactic core in the Age of Technology. The worlds they colonized were rich in mineral wealth however due to the galactic core the region which they inhabited were plagued by unstable physics.

The colonists were forced to become self-sufficient. Due to the hostile nature of the surface the colonists developed underground societies. During the Age of Strife, the long isolation gave birth to the Squat race who evolved to suit their environment resulting in their tough but short statutes. The Squats attempted to appeal to the Eldar for aid but no help came. These events earned both races eternal enmity from the Squats.

The Squats traded with other alien races such as the Eldar and Orks. They maintained a stable peace for three millennia until the orka abruptly declared war on the Squats.

When the Great Crusade came to the Squat Homeworlds, the Imperial forces attempted to force the Squats into compliance but the Imperium struggled due to the hazardous battle terrains and technology of the Squats. Eventually a compromise was made allowing the Squat Homeworlds autonomy. In return the Squats provided their Kmperium tech-Priest access to their libraries of lost technologies.

The Squats face near extinction after the Tyranids wipes out majority of their strongholds. The remaining worlds that were left were swiftly annexed by the Imperium of Man. Embittered survivors of the holocaust joined the ranks of the Imperial Guards to regain their honor and revenge on the alien monsters that destroyed their worlds.

During their isolation, the Squat formed guilds which later became politically and culturally important parts of their society. The Squat colonies in turn formed into bodies called Leagues creating complex trade, mutual defence and political agreements. Unlike the Imperium, the Squats never lost their knowledge, their engineers produced by the Guilds had a clear understanding of the Scientific Method rather than the religious dogma-bound Tech-priests of the Adeptus Mechanicus.