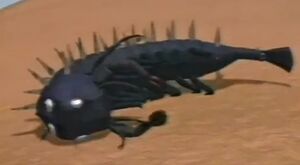 Natural History of an Alien

The Sputnik Bug is a small, non-sapient arthropoid native to an unnamed high-gravity desert planet.

With an elongated body, the Sputnik Bug has the ability to curl into a ball, allowing it to roll down the sandy dunes of its homeworld. In such a high-gravity environment, falls can be extremely dangerous. For this reason, the Sputnik Bug has developed thick body armor with numerous spikes on its back.

Retrieved from "https://aliens.fandom.com/wiki/Sputnik_Bug?oldid=160510"
Community content is available under CC-BY-SA unless otherwise noted.