Alien Species
Register
Don't have an account?
Sign In
Advertisement
in: Ben 10 Universe, Races of the Milky Way Galaxy, Sapient Species,
and 10 more

Ben 10
Splixson is an alien species from the Earth-like planet Hathor.

Splixsons are small, humanoid creatures about the size of a 10-year-old Human child. They have white skin, black heads, black shoulders, and a black overall-like design from the neck down. Their hands are large with four digits, and their feet are merely stubs. They have three fin-like growths on their head and gem-like sensory nodes[1] on their arms and torso.

Splixsons are preyed on by the Panuncians, as they can also duplicate themselves indefinitely.

Splixsons can duplicate themselves indefinitely by binary fission.[2] When faced with a single enemy that is larger and more powerful than a single Splixson, they normally compensate by overwhelming their opponents with sheer force of numbers.

Each Splixson clone operates independently, regardless of what the others want them to do and each clone is indistinguishable from the others. This allows Splixsons to do multiple tasks simultaneously or to cover a large area.

A Splixson's sensory nodes assist in the sensory web that connects all of their clones,[1] allowing them to share senses and physical sensations such as pain.

Splixsons appear to have more flexibility and agility compared to a Human.

A Splixson's large claw-like digits allow them to burrow underground. They can also pop out of the ground like a mole.

Splixsons can breath underwater, and jump surprisingly high for their size.

A Splixson's clones share a link to keep track of each other,[2] making it so that if one Splixson is hurt, all the others feel the same pain.

The Splixons' shared pain will especially become a problem because if one Splixson gets killed, the others are automatically killed as well. Therefore, this will negate the ability to form an army of clones.

The size and power level of each individual Splixson puts them at a disadvantage when dealing with a bigger and stronger enemy such as a Vreedle.

Splixons appear to have a poor resistance to cold environments.

If Splixson clones cannot agree on one plan, an argument might break out between them.

Like other living beings, Splixons can be controlled by a Vladat's Corrupturas. Despite that, the latter cannot control a whole set of clones, as each of them are independent. Furthermore, the Corrupturas will not be copied across said clones.[3]

Splixsons are peaceful residents of the planet Hathor, and tend to work as farmers or artists, among other jobs.[2]

The Splixsons' ability of duplication was developed to avoid extinction, as they are low on the food chain.[2] 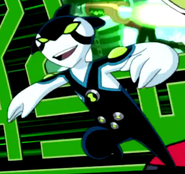