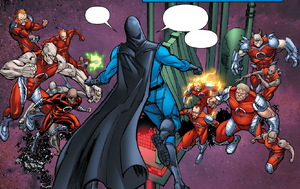 The Split Second Men are a group of enhanced humans from Earth.

Originally three minor technicians from Martin-Colding Labs, they were radically transformed during the Unified Field Theory experiment. The experiment was intentionally sabotaged by one of their employers, Dr. Colding in spite of his more gifted colleague Ron Lessik. Since the experiment Dr. Colding gained temporal abilities which he used to benefit himself in his goal to conquer space-time using the trio as his henchmen. Eventually he took the name Abaris and joined forces with multiple versions of himself across the multiverse, pooling their individual teams of Split Second Men into an army.

They are continuously being fought by Ron Lessik in his superhero persona, The Traveler. In addition they have engaged themselves in a war against the Hybrid allying themselves alongside the True People. Among their alliances are the Inheritors who they tried to assist in conquering Earth, but were foiled by Soldier Zero and the Traveler and a remorseful alternate Abaris.

The Split Second Men are humans that are each capable of manipulating one of three of the fundamental forces of the universe.

Retrieved from "https://aliens.fandom.com/wiki/Split_Second_Men?oldid=135069"
Community content is available under CC-BY-SA unless otherwise noted.