Alien Species
Register
Don't have an account?
Sign In
Advertisement
in: Creatures with Unknown Diets, Insectoid Species, Anatomy of an Alien Universe,
and 5 more 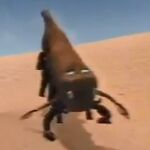 Natural History of an Alien
The Splatter Bug is a small, non-sapient arthropoid native to an unnamed high-gravity desert planet.

Unlike its armored cousin, the Sputnik Bug, the Splatter Bug has developed no defense mechanism against the danger of falling over in a high-gravity environment. When it falls off, its soft body is crushed by the impact, which results in death. For this reason, the Splatter Bug has been described as an evolutionary dead end.