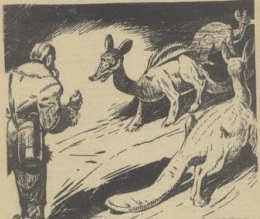 Spinybacks, a.k.a. "Spinies", are a species of non-sapient quadrupeds native to Ganymede. They're herbivorous and live in herds. It has been noted that they have no natural predators.

Spinybacks have a long, mobile snout, large ears and a scaly muscular tail which they can use for attack and defense. Their eyes are purple and their brains have been described as "by no means mediocre", making them relatively hard to capture. However, when it comes to physical confrontation, it's easy for a Human to subdue a Spinyback due to the fact that Earth's stronger gravity generates more powerful muscles.

The name "Spinyback" comes from a row of pliable, crimson-colored spines present on the backbone of the males, which are used to attract the females. Some of their vocalizations sound similar to Human laughter. Although they have a heart, it has been noted that "no spinie ever died of heart-failure, as far as is recorded".

Being native to Ganymede, the Spinybacks naturally do not breathe oxygen (although fire is still possible in the Ganymedean atmosphere). They enjoy sugar and are affected by alcoholic beverages.

Retrieved from "https://aliens.fandom.com/wiki/Spinyback?oldid=172521"
Community content is available under CC-BY-SA unless otherwise noted.