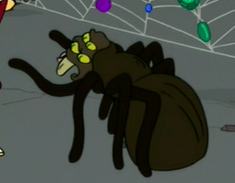 Futurama
Spiderians are a species of sapient spiders native to Tarantulon VI.

A newscast at the beginning of Three Hundred Big Boys tells of their defeat by Zapp Brannigan and the Earth army. As a result, their vast silk resources are plundered by Earth, and every citizen receives a $300 tax rebate.