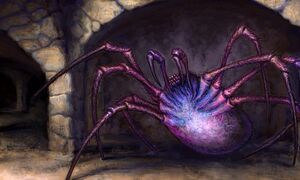 H.P. Lovecraft
The Spiders of Leng are a race of giant purple spiders from the extradimensional realm of the Dreamlands.

As their name states, the Spiders of Leng appear as giant spiders the size of a Shetland pony when young and can become larger than an elephant when they reach adulthood. They possess common spider atributes such as the archnid appearance, the eight legs, fangs with a venomous bite, abdomen with strong webs used to ensnare prey, and multiple eyes. The skin color of the Leng Spiders are often seen purple or violet.

The Leng Spiders once controlled an area of the Dreamlands called the Plateau of Leng, were they onced thrived in before being driven out by the Men of Leng after fighting in a brutal world. The Leng were forced to escape into the southern vales and mountains of the Dreamlands. They still reside in this area and feed off of any creature to unknowingly stray into their territory.

Retrieved from "https://aliens.fandom.com/wiki/Spider_of_Leng?oldid=182121"
Community content is available under CC-BY-SA unless otherwise noted.