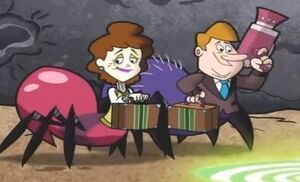 The Grim Adventures of Billy & Mandy
The Spiders are a sapient arachnoid species from the Spider Planet, in the galaxy Omega 9.

Their appearance is reminiscent of an arachnid centaur-like creature, with a human-looking upper body and an arachnid lower body, although with only six legs rather than eight (making it eight limbs in total counting the two humanoid arms). They have the ability to produce web and paralyze victims, and their lifespan encompasses many millions of years.

A Spider family came to Earth in an asteroid during the Jurassic Period, consisting of a father, mother and the daughter, Velma Green, who became known as the Spider Queen due to her ability to summon and control Earth arachnids.

Young Velma Green
Add a photo to this gallery

Retrieved from "https://aliens.fandom.com/wiki/Spider_(The_Grim_Adventures_of_Billy_%26_Mandy)?oldid=186420"
Community content is available under CC-BY-SA unless otherwise noted.