Alien Species
Register
Don't have an account?
Sign In
Advertisement
in: Ben 10 Universe, Sapient Species, Races of the Milky Way Galaxy,
and 5 more 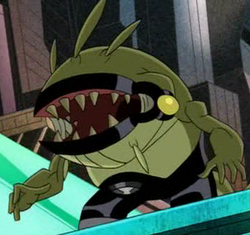 As their species' name suggests, Sphoeroids are large blowfish/lizard-like creatures with round, fat bodies mostly dominated by their "head". They also have green skin with tan underbellies, stubby legs with rhinoceros-shaped feet, short arms with bloated four-fingered hands, and long lizard-like tails.

A Sphoeroid's face consists of a large, jaw-filled mouth with black lips, round yellow eyes at the corners, three green "quills" on the forehead, and two tan quills on the chin.

Sphoeroids are able to expand to spew massive amounts of a green slippery slime.

A Sphoeroid's slime can be made highly conductive by electricity, such as that generated by a Nosedeenian.

Sphoeroids possess a degree of enhanced strength, being able to push back entities around their size.

Similar to Loboans, Shpoeroids can propel themselves like rocket boosters using their slime.[3]

Because they have no nostrils, Sphoeroids are immune to poisonous gases like those on their home planet.

Sphoeroids can accidentally slip on their own slime.

Sphoeroids can be unintentionally shocked due to their slime being highly conductive. 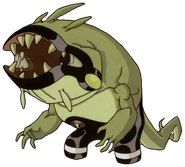 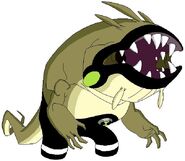 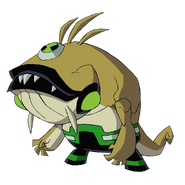