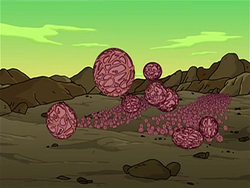 Futurama
The Spheroids are a species of sphere shaped aliens. Their history and language remain unknown to humans. Despite their homeworld, Spheron I, being of no military or strategic value, Earth invaded them anyway. The Spheroids are ruled by the Brain Balls, whom are the only known members of their species with the ability to communicate. As a consequence of the war with Earth, the Spheroids lost their homeworld, and had to move off world to places unknown. A later sighting confirmed that they are not extinct. They have no means of defense or offense other than rolling over and/or bouncing on their enemies with particular effectiveness.
Community content is available under CC-BY-SA unless otherwise noted.
Advertisement