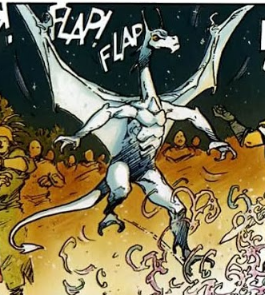 Sphax is the God of Diplomacy from the land of Darshan on the planet Troy.

Sphax takes the form of a thin white dragon.

Sphax usually accompanies the Darshan emissaries to Eckmul in order to protect them. During one visit to Eckmul under orders from his Pantheon to observe Lanfeust and his connection to the Master of Gods, the young hero accidentally made him manifest. Thinking Sphax to be a dragon he conjured for Cixi, the Darshanide ambassador, Feh-Rehr, already knowing who the dragon was played along with the ruse, though he suggested Cixi name him Sphax. Sphax served as a mount to Cixi and later witnessed the rogue magician Thanos lead a coup against the sages of the land.

After getting them out of the city, maintaining his cover as a dragon he enlisted the help of his countryman Feh-Rehr to give them sanctuary in Darshan.

Later after meeting the Shah of Darshan the Lanfeust and the heroes were given permission to see the gods. The high priests hearing this refused to allow foreigners an audience with the gods. They invited a riot among the people, forcing the Shah to make Lanfeust and his friends to pass through several trials to ensure their worthiness. Sphax intervened to save the heroes, in front of all the people in the city, who recognized him as a god. Thus his identity as a member of the Darshanide Gods was revealed.

After the heroes attempted to cross the northern mountains of Darshan to reach the Palace of the Gods he came to their aid managing to appropriate a carriage from the celestial bureaucracy. He brought Lanfeust before Xhiatyr and the other gods. While the gods fear Lanfeust due to his power, they recognized that Thanos, Lanfeust's archenemy was a bigger threat and decided that the best was for Lanfeust to find the Master of the Gods before the tyrant. All the gods save Swoog and Zkrkrxs who attempted to kill the heroes forcing Sphax to intervene.

Later to draw Thanos's attention from the group, Sphax tricked the human into following him on a wild goose chase and give Lanfeust the slip.

Retrieved from "https://aliens.fandom.com/wiki/Sphax?oldid=163852"
Community content is available under CC-BY-SA unless otherwise noted.