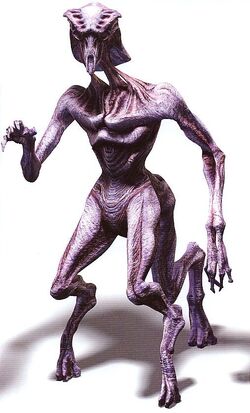 Star Trek
Species 8472 (their Borg designation), also known as the Undine, are a non-humanoid tripedal species hailing from Fluidic Space.

Species 8472 or Sra'xa'diin, Emphoris, and Undine on Star Trek Online are biologically unique. Their DNA is arranged in a triple helix formation, and is the most densely coded DNA ever encountered by Starfleet. They are known to have as many as five sexes. The species' immune system is able to destroy anything which penetrates their body systems: chemical, biological, or technological. They are impervious to normal Borg assimilation methods. Their immune system can even be used as a means of attack. If cornered they attack with their claws, rather than with any other type of weapon, allowing Species 8472's cells to come into contact with a victim's; they will infect every system and consume it from the inside out. In addition, Species 8472 are able to commit suicide by releasing a cellular toxin into their bloodstreams. They emit a biogenic field around their bodies; this field renders them nearly invisible to sensors, making it impossible to pinpoint their exact location. This field also interferes with normal transporters. Exactly how this biogenic field is produced is unknown.

Physiologically, Species 8472 are distinctly non-humanoid. They are even able to withstand the vacuum of space. It is probable that in fluidic space they are able to swim through the organic matter similar to their ships, which share their unique physiology. They communicate exclusively via telepathy. With their dense musculature and increased height, Species 8472 possess great flexibility and can move much faster than either humanoids or Borg. They are able to penetrate force fields and rip through bulkheads with apparent ease.

They have very little soft tissue, and much of their skeleton is exposed, particularly around their necks. Species 8472 does appear to have nostrils, suggesting a sense of smell; however, they possess no ears or mouth and have distinctive cross-shaped pupils. They appear purple to green depending on the lighting. It is not known if Species 8472 is the only species to have evolved in fluidic space or if they exterminated the others as they attempted to do in normal space.

The bioships used by Species 8472 are very advanced and share their unique genetic makeup. They are living organic vessels capable of warp speed, and are very heavily armed and shielded. Inside, the walls and floor appear to be flesh; spider web-like material is used in place of an electro-plasma system. The structural supports are made of bone. The ship's computer is similar to a nervous system and uses neuropeptides. The ships are native to fluidic space and are able to function as well in the organic matter of fluid space as they are in the vacuum of normal space. They are also equipped to detect the pressure wave created when a vessel crosses into fluidic space from normal space.

A bioship carries only one crew member, who acts as the pilot. Its hull is resistant to conventional weaponry, including Borg assimilation, and also reflects sensor scans and tractor beams. The bioships are armed with energy beam weapons. Although the beam appears less coherent than either Starfleet or Borg weapons, it is able to inflict greater damage. Nine bioships can combine their firepower using an energy focusing ship, forming a planet killer. It is unknown whether the ships evolved naturally or if they were engineered to fit their task by Species 8472.

All that is known of Species 8472's culture is that the species is highly xenophobic; they consider all other lifeforms to be genetically impure and inherently weak, and any alien entering fluidic space is seen as contaminating the realm. They believed the only way to purge a species of its weakness was to exterminate them, even if that meant eliminating all life on the planet. They also appear to have appreciation for art.