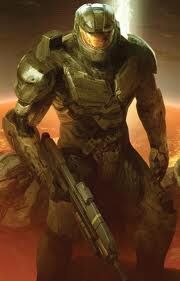 Depending on the type of Spartan the height of a Spartan II (fully armored) is 7'2 feet tall, a Spartan III (Fully armored) is 6’10 feet tall, and a Spartan IV (Fully armored) stands on average a little shorter at 6’9, all while boasting a reinforced endoskeleton. Their training and physical conditioning along with the chemical and genetic enhancements give them super-human speed, strength and endurance. They are able to punch through solid concrete without doing damage to themselves, they are able to lift roughly three times their body-weight, due to physical augmentation, their own body-weight is double that of an average human, they have near unbreakable bones, punches able to shatter the receivers bones, reflexes honed close to 20 milliseconds which enables them to perceive events in slow and fast motions, agility which enables them to be near untouchable in melee combat, they can run in excess of 30 mph, in some cases they can even exceed that and are able to take injuries capable of killing any normal human, in one case, a Spartan had a collapsed lung, fever, a bleeding liver and low blood pressure, and could continue fighting, let alone living. Their abilities increase over time, as they become more adjusted to them, also some Spartan candidates abilities differ depending on how fast or strong they were pre-augmentation, leading those specific Spartans to possess speeds and strengths their "siblings" would not. As such many measurements could be considered inaccurate. Spartans can also integrate an A.I (Artificial Intelligence) into their armour, further increasing reaction time and combat awareness as well as give them accurate knowledge and details of subjects they otherwise would not, making them very formidable.

Created parallel to the SPARTAN-II Program, the MJOLNIR Armor is currently the most advanced piece of tactical military hardware in their hands. Each suit alone costs as much as a small starship in an attempt to create a powered exoskeleton capable of taking full advantage of the physical capabilities of a SPARTAN-II. The battlesuit is constructed in overlapping layers. It is a sealed system, capable of extravehicular activity or operations in toxic atmosphere. It is hardened against EMP and radiation, and has filters that are completely effective at removing toxins and bacteria from local atmosphere.

The armor's outer shell is composed of a multilayer alloy of remarkable strength and has been augmented with a refractive coating capable of dispersing a limited amount of energy weapon strikes. The suit contains a gel-filled layer underneath a thick black armored bodysuit. The gel layer regulates temperature and can re-actively change its density. The inner skinsuit is made of a moisture-absorbing synthetic material linked to an environment control computer and the occupant's neural interface.

Each human being has a molecular fiber network called the nervous system within their brain. An upgrade to the standard Neural Interface is issued to all high-ranking officers; another modified version of the neural lace is issued to all SPARTAN-II's. This network translates electrochemical signals to digital code and routes them through an interface connection at the rear of the skull. Through this interface, the user's thoughts command the armor's movement and weapons; and input from the onboard sensors comes directly to the user's mind. The synthesis of machine and mind is so fast that it is almost impossible to chart reaction time.

Between the external armor and the internal padding is the most devastating weapon the suit carries: a layer of reactive metal liquid crystal. Woven by molecular tools into a superdense optical computer memory, this revolutionary crystalline layer forms a network, capable of supporting the kinds of Artificial intelligence usually reserved for starships, as a type of piggyback system. An A.I.'s personality and processing matrices can be carried by the armor and delivered to the suit via onboard storage in a crystal data chip no larger than a personal credit card. Such technology did not exist when work began on the Mark I prototypes. At the same time it is amorphous, yet amplifies force, doubling lifting capability and increasing reaction time by a factor of five. Unfortunately the system is so reactive that normal human beings cannot use the suit without injuring themselves. Only humans who have carbide ceramic ossification, a skeletal augmentation, such as a SPARTAN-II, can safely wear the suit.

The suit also possesses other features that enhance its wearer's abilities. It has numerous clips, belts, and magnetic holsters for the attachment of additional weapons and ammunition; an advanced Heads-Up-Display(HUD) linked to sensors in the gloves detects the type of weapon and devices held, and to project shield strength, ammunition count, a targeting reticle, waypoints, a radio uplink for communication, health monitoring and other helpful data.

In its final phase the MJOLNIR battlesuit weighs half a ton, or 1000 Lbs and when in use, is a fully neural-linked system. With an on-board A.I using the human mind for parallel processing, the SPARTAN-II/MJOLNIR combination is designed to be the most devastating intelligence tool ever created.

The first Spartan program, called Project Orion, was the UNSC's attempt at mass-producing super-soldiers in order to control a growing populace.

Although it was considered a failure by many (the Spartans falling far short of expectations), the idea stayed.

In 2511 the project relaunched as the SPARTAN-II Program, held at the military fortress world Reach. These candidates were far more successful. Out of 300 five year old children chosen, only 75 became Spartan candidates. Trained from the age of 6 until 14, they followed a training course equivalent to a Special Forces program, just as children. By the age of 14, they were said to have physiques of fully grown Olympic athletes due to their rigorous training. They then had biochemical and surgical augmentations, making their bones unbreakable, their reflexes near instant and their strength three times that of a strong human. They would also later receive MJOLNIR armour, which boosts the strength of the user by 5; so ultimately, their strength would be 15 times that of an average human (3 x 5).

This program was followed by the SPARTAN-III Program, designed to make many more Spartans due to the threat of the human extinction by the Covenant. The SPARTAN-IIIs underwent similar training at the planet Onyx, having similar augmentations after a lengthy training period, again as children. The SPARTAN-IIIs however used less effective armour to make the program more cost effective for the UNSC. Whilst many SPARTAN-IIIs died due to being put on what would be considered impossible suicide missions, they always achieved victory in their supposedly impossible objectives, proving their worth. Some SPARTAN-IIIs, however, did survive.

As of 2553, the SPARTAN-IV Program was in progress; unlike their Spartan III and II predecessors they were not trained from a young age, instead they are the best and brightest of already battle hardened humans, turned Spartan, they do not possess the same genetic modifications as the previous Spartans but still retain some of them, such as increased strength and speed, near unbreakable bones which are both needed to even don their advanced armour. (There could be more Spartan survivors of the Human-Covenant war if the three aboard Spirit Of Fire are included, who are SPARTAN-IIs. These are Douglas 042, Alice 130 and Jerome 092)