Alien Species
Register
Don't have an account?
Sign In
Advertisement
in: All Tomorrows Universe, Bipedal Species, Humanoids,
and 11 more 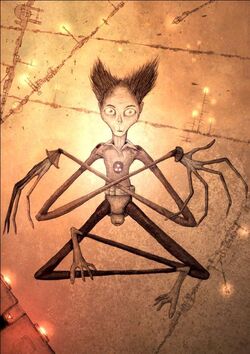 Generation ships made from hollow asteroids

Evolved from the Star People

Nemo Ramjet
The Spacers were a posthuman species descended from the Star People. Their ancestors were the only Star People who escaped the Qu's wrath.

While the Qu invaded countless other worlds, the ancestors of the Spacers built giant generation ships out of hollowed out asteroids. While they were able to enclose enough air and water for survival, there was no gravity inside their ships. The Spacers were not the only ones who tried to flee from the Qu, but the only ones who succeeded.

Using their knowledge of genetic engineering, the Star People adapted themselves to life without gravity, which proved to be much more relaxing than living on a planet, avoiding rebellions like in the generation ships of the Star People's first attempt at colonizing the galaxy.

Free from gravity, the limbs of the Spacers are long and spindly, with thin, hollow bones. At the same time, their circulatory and digestive systems were compressed to avoid heart problems and congestion. They moved by pressing out jets of air through their modified anuses.