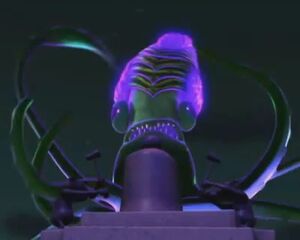 Madagascar
The Space Squid is a kind of sentient Martian cephalopod-like creature from Mars.

The space squid is a race of Martians that seem to be more advanced than humans, they also seem to be human-sized as they are bigger than penguins, lemurs and otters at least.

Space Squids are known to spit purple goo that can paralyze any creature that contacts it, the space squid's diet is not known, but they may be carnivores as they are seen with fang-shaped teeth which are for eating meat, their paralyzing goo may also be a form of hunting tool as well as for self-defense.

Retrieved from "https://aliens.fandom.com/wiki/Space_Squid_(The_Penguins_of_Madagascar)?oldid=166528"
Community content is available under CC-BY-SA unless otherwise noted.