Alien Species
Register
Don't have an account?
Sign In
Advertisement
in: Stub, Lost in Space Universe, Wildlife,
and 11 more 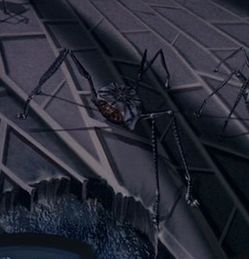 Lost in Space
The Space Spiders are a race of silicon lifeforms which live in deep space and naturally seek heat to locate sustenance. They are cannibalistic, and will eat their own kind immediately upon one's becoming injured; this may be due to their silicon nature combined with their obviously active lifestyles, which likely burns a lot of energy. Their mouths are full of several rows of razor sharp teeth, but their most unique feature is their legs. These are notable because they have three legs that split at the 'elbow' into two pairs of lower legs. Apparently they are capable of prolonged hibernation, as the Robinson family discovered them on a derelict spaceship that had obviously been derelict for a long time. If one is bitten by a Space Spider, they slowly become infected and eventually become hybrids with the species, which can produce a swarm of smaller spiders eventually, although the gestation rate appears to be excruciatingly long.