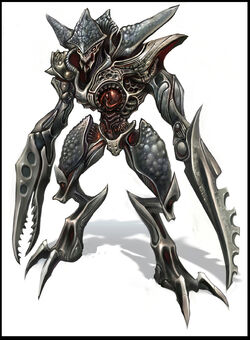 Metroid
The Space Pirates are a faction of power-hungry brigands and conquerors bent on ruling their galaxy and enslaving all other races. To this end, they are bent on destroying the Galactic Federation and their hated enemy, bounty hunter Samus Aran.

Though they are generally hunched, non-mammalian bipeds, Space Pirate physiology varies drastically due to their propensity for genetic self-modification. The Pirates encountered on Zebes and Aether resembled arthropods or crustaceans, with thick exoskeletons and long, lobster-like pincers housing their gun barrels. On the other hand, those stationed on Tallon IV, appeared to be reptilian, with three-clawed hands, predatory jaws, and glowing yellow eyes. The ones inhabiting Urtraghus were by far the most unique variation seen so far, with toothy mouths that curve upward in the middle and four pairs of eyes instead of the usual two.

Despite their name, Space Pirates are actually a highly organized, militaristic society, often relying on powerful individuals like Ridley to command them. Obedience is a strict law in their society, and the punishment for violating it is death. This extreme ruthlessness permeates all aspects of Space Pirate culture; despite being intensely xenophobic, Pirates hold little regard for the lives of their brethren. The lowest members of their stratified hierarchy are often mistreated brutally, either through torture, starvation or mutilation. Ironically, Space Pirates are extremely stringent about possessions— thievery within their race is punished severely.

Space Pirates are intelligent, yet use much of the technology they find or steal to make new weapons. Their culture is much the same, as most of their culture is stolen from other cultures, primarily Earth culture as we have the same general body shape: one head, two legs, two arms, etc.

Much of Space Pirate military technology is experimental. Many of these experiments include Phazon and Metroids, but the Space Pirates have also tried to reverse-engineer the abilities of Samus Aran such as the morphball.

Attached to the beings' right arm, the GACs are fired by raising a single finger into an alcove containing a trigger. They fire small, reddish bolts of energy capable of dealing minimal damage, but they fire very fast and have extremely low recoil. After the events on Tallon IV, the pirates abandoned GACs for QACs, Quantum Assault Cannons.

An upgrade to the GAC which proved too weak to do serious damage to major threats. Little else is known.

The Space pirates have based much of their military on the element Phazon. They set up full bases when trace elements are found. It is a highly radioactive mutagen which can increase the threat level of space pirates exponentially. Through these experiments the space pirates have created many abominations of nature. The high death toll of miners and test subjects does not deter the space pirates from this powerful resource. It is revealed in the Space Pirate Logs that some Space Pirates protested Phazon being used in their homeworld.