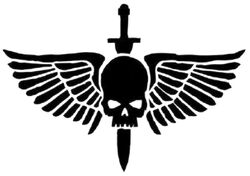 "They shall be my finest warriors, these men who give of themselves to me. Like clay I shall mould them and in the furnace of war forge them. They shall be of iron will and steel sinew. In great armour I shall clad them and with the mightiest weapons they will be armed. They will be untouched by plague or disease; no sickness shall blight them. They shall have such tactics, strategies and machines that no foe can best them in battle. They are my bulwark against the Terror. They are the Defenders of Humanity. They are my Space Marines and they shall know no fear."
―The Emperor of Mankind

The Adeptus Astartes (commonly known as Space Marines or colloquially as the Angels of Death) are bioengineered super soldiers derived from humanity. They are one of the most elite and feared fighting forces in the Imperium of Man.

The original Space Marines were known as the Thunder Warriors, human soldiers genetically augmented by the Emperor of Mankind to serve as his most elite warriors during the unification of Earth, or Terra as it would become known during this time. After the birth of the Emperor's sons, the Primarchs, within the cloning facilities of Mt Everest, the next generation of Thunder Warriors were augmented by their "gene-seed" rather than that of the Emperor and renamed Space Marines in preparation for the Great Crusade, the Emperor's campaign to reunite the human colonies across the galaxy. However, the Primarchs, in their infancy, were abducted by the Chaos Gods and scattered throughout the galaxy. By the time they were found and reunited with the Imperium, they had grown to adulthood and become the rulers or high ranking members of the societies of the planets they were raised on. Upon returning to the Imperium, the Primarchs assumed command of each Space Marine legion bearing their respective gene-seeds, which in turn adopted aspects of the culture their Primarchs grew up in.

The Imperium of Man eventually became divided as a result of a civil war known as the Horus Heresy. This war started as a result of Horus Lubricae, Primarch of the Sons of Horus legion and the most trusted of the Emperor's sons, became corrupted by the influence of the Chaos Gods and spread this corruption to his fellow Primarchs, turning their Space Marine legions against the Imperium. This war, accumulating countless deaths throughout the galaxy, ended with the Chaos invasion of Terra, defended by the remaining Space Marine Legions who remained loyal to the Emperor. Although the Imperium emerged victorious with the death of Horus, the Emperor was fatally wounded and permanently confined to the golden throne, a life support system powered by the daily sacrifice of 1000 human psykers. In the aftermath of the Horus Heresy, Robooute Guilliman, Primarch of the Ultramarine legion, proposed the codex astartes, guidelines on the tactical operations of the Space Marines and the decree to divide all loyalist legions into smaller chapters, something which Guilliman hoped would prevent another civil war on the scale of the Horus Heresy from happening. As of the Horus Heresy, all of the Primarchs who remained loyal to the Emperor had either died, become incapacitated or simply gone missing, while the traitor Space Marine legions were driven into the eye of terror, a rift between the universe and the warp, and became the Chaos Space Marines.

Near the end of the 41st millennium, Roboute Guilliman recovered from his incapacitation and unleashed the Primaris Space Marines, a new generation of Space Marines augmented further than the previous generation.

The most common class of Space Marine, tactical marines are typically equipped with boltguns, although they may be equipped with flamers, meltas, rocket launchers or plasma guns.

Space Marines specialised in the use of heavy weapons, devastator marines are typically armed with heavy bolters, which may be exchanged for a lascannon, plasma cannon or multi-melta.

The class typically assigned to new space marines, scout marines are equipped with light armour and bolters, shotguns or sniper rifles. Scouts are usually reserved for reconnaissance and are not given their complete augmentations or power armour until they have proven themselves to their chapter.

Retrieved from "https://aliens.fandom.com/wiki/Space_Marine_(Warhammer_40,000)?oldid=164649"
Community content is available under CC-BY-SA unless otherwise noted.