"We send those men up into space to unlock the doors of the universe, and we don't even know what's behind them."
―Fox Mulder 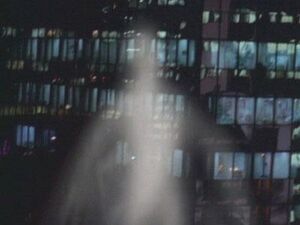 Invading and controlling the body of a host
Traveling through space

Chris Carter
This "space entity" is a mysterious non-corporeal lifeform of extraterrestrial origins, and may be in some way linked to the "Face on Mars" rock formation located on the Martian region of Cydonia.

This translucent, phantom-like creature is able to enter Human bodies and control their actions (at least to some degree). It is also capable of achieving great speed, as proven by the fact that it travels from Earth to space in a matter of minutes.

This alien's origins and motivations are completely unknown. It was first encountered by a group of shuttle astronauts in 1977 and took control of the body of Colonel Marcus Aurelius Belt, who would later become head supervisor of the next shuttle programs in NASA.

The creature forced Belt to sabotage several missions and, in a particularly dangerous mission in 1993 it left his body to attempt to kill a group of astronauts by causing an oxygen leak on their shuttle. Later, Colonel Belt was able to fight the possessing entity and save the astronauts by telling them how to correct the course in order to land safely.

That night, Belt had a violent attack and fought the entity again until throwing himself out of the hospital's window, thus destroying himself along with the alien.

Retrieved from "https://aliens.fandom.com/wiki/Space_Entity_(The_X-Files)?oldid=191629"
Community content is available under CC-BY-SA unless otherwise noted.