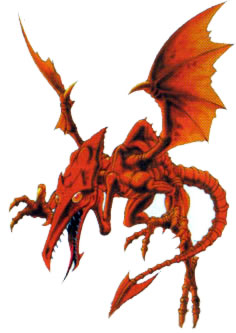 Sapient (Presumed—this may be due to Space Pirate manipulation.)

"Space Dragons" are a rather enigmatic race, of which the infamous Ridley is the only known member. Very little is known about them, but it is speculated that they are natural to Lower Norfair within the former planet Zebes. The entire species minus Ridley himself were eradicated by a huge genocidal attack by the Galactic Federation, who had deemed them to be too dangerous to be allowed to continue existing. It is of note that the Galactic Federation tend to use the term "Geoform 187" as opposed to "Space Dragon" when in reference to them - although it is currently unknown whether this actually refers to just Ridley or the entire species as a whole. In a similar way to dogs, there appears to be a multitude of subspecies, as they can vary widely between members - while some may have large wings, others may have small wings, and colors may range anywhere from black to purple.

Retrieved from "https://aliens.fandom.com/wiki/Space_Dragon?oldid=180567"
Community content is available under CC-BY-SA unless otherwise noted.