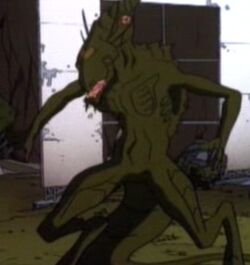 Spacedemon is one of the several extraterrestrial actors living incognito on Earth and affiliated with the Hollywood branch of M.I.B., better known as "the Agency", which allows him to appear in films in his actual alien form, instead of wearing a disguise.

He's a tall, menacing creature with an elongated cranium, digitigrade legs and a long reptilian tail.

In his films, Spacedemon plays the part of a monstrous face-eating alien creature. In real life, however, he's just an actor, although a somewhat resentful one after he felt his spotlight was stolen by other aliens such as Predeterminator and Prey.

Retrieved from "https://aliens.fandom.com/wiki/Space_Demon?oldid=180427"
Community content is available under CC-BY-SA unless otherwise noted.