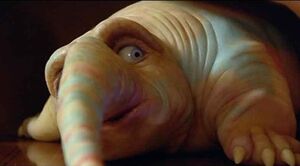 The Souliman Aktapan is a species of small, mammalianoid creatures with multicolored skin. A member of this species called Picasso was kept as a pet by 23rd century businessman Jean-Baptiste Emmanuel Zorg.

These creatures are hairless quadrupeds, about the size of a small dog. They have multicolored skin which is mostly tan with some mixed patterns of pink and light-blue. Their short paws are reminiscent of those of a mole. Their eyes, in contrast, are very human-like with light-blue colored irises. Most notably, they have a long thin proboscis, about the same length as the rest of their bodies.

Although nothing is known about their origins and natural history, they appear to be pretty helpless creatures, given as Picasso was unable to help his master when his master was choking on a cherry.

Retrieved from "https://aliens.fandom.com/wiki/Souliman_Aktapan?oldid=122878"
Community content is available under CC-BY-SA unless otherwise noted.