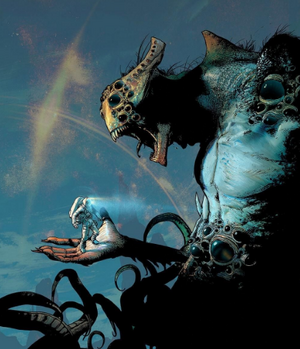 Faster Than Light
The Soul Eaters were a species of from an unnamed planet.

Giant beings with multiple eyes existing on their heads and torso. The Soul Eaters were telepathic creatures capable of transmitting their thoughts. They subsisted on the psychic energy that comes from extreme emotions of other races: hatred, fear, and rage. They are long-lived, as one subject reached an age of 295. Soul Eaters are hermaphrodites, and reproduction is a purely functional activity. Due to their collective consciousness, any kind of emotional attachment is infeasible.

There was a race who saw the Soul Eaters as their enemy, and they had a unique ability to close their minds to them. Taking them by surprise the Soul Eaters were wiped out. Only one member of the species survived on a distant world. It sustained itself using the fear from the collective memories of its species known as The Hermit. However eventually it would not survive for long. When an Earth ship approached it contacted them for assistance. A sole human was granted to ascertain the situation of the . Though surprised by the Hermit's appearance, the two established a dialogue. When astronaut fell asleep, the Hermit fed on the human's fear via dreams for five days. Upon awakening the astronaut demanded why the alien would do such as thing and the true reason why its species were wiped out. The alien confessed as the potential threat its kind did, though it justified that its species only did so in the name of survival. Additionally it fed on the human's negative emotions to preserve its species, it was pregnant and about to give birth. The Hermit informed that its child would be a new beginning for its kind, and perhaps subsist on the powerful emotions of the humans. Despite its species history, the Hermit believed that since its mind was new, it would not possess the same needs of negative emotions but perhaps positive ones. The Hermit decided to remain behind on the world, as it was near death, but the astronaut promised to take its child to Earth and omit its true origins to his people.

The concept of lying was paradoxical to them. They were of one race because they shared their minds, possessing a collective memory and belief system. The creatures served mostly as diplomats to a number of planets in their star system as their telepathic abilities were highly valued. Though they fed on the psychic energies of other races, they always spoke the truth. They resolved disputes, as it was in their interest not to destroy civilizations that sustained them.

Retrieved from "https://aliens.fandom.com/wiki/Soul_Eater?oldid=173938"
Community content is available under CC-BY-SA unless otherwise noted.