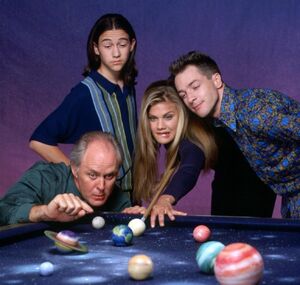 3rd Rock from the Sun

The Solomons' species is the unnamed sapient species to which the Solomon family belong. As the family has been living on Earth disguised as Humans, their actual appearance is a mystery.

The family is composed of Dick, the High Commander, Sally, a decorated military officer, Tommy, a seasoned intelligence specialist, and Harry, the communications officer. Although their true nature and home world are almost completely unknown, we do know that the Solomons have landed on the planet as part of a research expedition to observe the natives. In order to blend in to Human society, the aliens have assumed a Human form.

The true form of the aliens is almost completely unknown. It has been said that their natural forms resemble gelatinous purple tubes, though they have also been referred to as clouds of gas in their childhood states, which belies some idea of what their society is like. Upon arriving on Earth in their Human forms, Dick was surprised that Human heads could not swivel to 180 degrees, asking "How do they lick their backs?".

Their natural bodies lack the forms of physical definition that Humans have, including sex organs. Reproduction in their species is described as entirely non-sexual, involving simply sending packets of genetic material to potential partners through the mail. The members of their species are apparently so outwardly similar to one another that the Solomons have little to no concept of race or ethnicity, and possibly even gender. Sally asks at one point why she had to be the woman. Upon taking up their Human disguises, the Solomons had to invent a race for themselves, even though they appear obviously Caucasian. They eventually decided that they were Jewish because of their surname (which they had seen on the back of a passing truck).

It has also been mentioned that the Solomons' species is almost completely devoid of emotions and most of the relationships that Humans have with another. The Solomons experience Human emotion for the first time during their mission on Earth, and are most unprepared to deal with this sudden emotional surge. While it is clear that they are unemotional, they do seem to have some semblance of what Humans would consider emotional interaction. In a sense, they could have vestigial emotions.

Virtually nothing whatsoever is known of the Solomons' home planet. Not even its name is known, as the family refers to it simply as "the home planet". Its location is stated to be in a barred-spiral galaxy on the Cepheus-Draco border, which is about 14 light-years away from our sun, as stated by Sally Solomon while criticizing Harry's choice of music. Tommy has also stated that there's a film in the air, and that the atmosphere is drafty, and implied that the home planet has no gravity.

The Solomons' race is far more technologically advanced than any Human society. Some of their technological achievements include intergalactic space travel, the able to completely alter their natural forms into that of a Human and reproduce in an entirely non-sexual manner. Harry effectively acts as an unwilling radio transmitter from their home planet due to a chip implanted in his brain.

The Solomons' race has an understanding of physics that is so advanced as to make even the most advanced knowledge of physics on Earth appear rudimentary. They also have an impressive knowledge of the arts, suggesting an artistic society. The highest ranking official of their race is known as the Big Giant Butt. There's also the Big Giant Head, who apparently got the job by kissing the Big Giant Butt. Rulers on their planet are unelected and are assumed infallible. It is stated that politicians on their world are chosen by seeing which one can outrun a giant fireball. Their society is almost completely emotionless.

Retrieved from "https://aliens.fandom.com/wiki/Solomons%27_Species?oldid=189037"
Community content is available under CC-BY-SA unless otherwise noted.