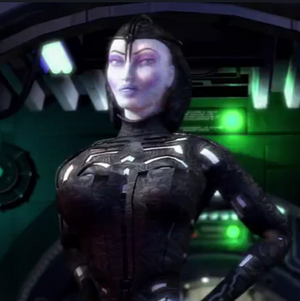 The Solatians are race of energy beings from Race.

Based on the movie, the Solatians can appear to be white-skinned humanoids, though their true forms are beings of pure light. They are able to turn themselves immaterial and through this form are capable of extracting pure Core from asteroids. The extraction process diminishes them, reducing their lifespan, but is negligent as their lifespans are hundreds if not thousands of years long. They can also use their powers to heal wounds of others.

The Solatians were the first beings to appear in the universe an event they called the First Light or what is commonly called the Big Bang. They coexisted alongside another race called Draykanians, a race of pure darkness. Both dwelled within a dimension outside the confines of the material universe, and though both species were diametric of one another, an eternal stalemate lasted for eons between the races.

When the jumpgates were created by an unknown race they accidentally stumbled onto the realm of the two ancient species. The Draykanians seeing a chance to shift the cosmic balance in their favor, tried to invade the material universe. The builders sensing their error closed the gate, but not before one Draykanian escaped. To maintain balance one Solatian was sent outside to counter the imbalance caused by the Draykanian. The jumpgate connecting to the celestial realm was lost creating the legend of the Lost Gate.

The Solatians are a benevolent species, believing in order and peace. They believe everything needed to be balanced, and were willing to sacrifice themselves to maintain it.

Retrieved from "https://aliens.fandom.com/wiki/Solatian?oldid=133074"
Community content is available under CC-BY-SA unless otherwise noted.