The Snivvians are a mammalian humanoid species native to the world of Snivvia. They are sometimes called Snaggletooths due to their protruding jaws and short fangs. Because they came from a planet with a cold environment, evolution gave them thick skin instead of fur. Due to their oversized snouts, Snivvians made excellent scouts and trackers. Most Snivvians chose to speak Basic as well as a diverse range of secondary languages. Some refused to let go of their native tongue for symbolic, subtextual, or fashionable reasons.

Snivvians withstood numerous hardships that they channeled into their impressive artistic works. After gaining the ability to travel between the stars, the Snivvians attracted the attention of the brutal Thalassian slavers. Snivvian culture was nearly destroyed before the Galactic Republic discovered the practice and stepped in to protect the Snivvians. This protection was reduced during later years, but combined Republic and Snivvian forces remained sufficient to hold off lesser threats to their planets.

Snivvians are among the most renowned artists and authors in the galaxy. Their homeworld of Snivvia had extremely cold temperatures and long winters, forcing the Snivvians to live long periods of time in subterranean caverns. During those long days, Snivvians developed their artistic talents and sensibilities. They produced masterpieces in holography, painting, sculpture, music, and the written word. Although technology would eventually lessen the need for this form of hibernation, Snivvians still felt the need—biologically and culturally—to continue the tradition. Many Snivvians traveled throughout the galaxy in attempt to live the lives of the subjects of their future artistic works, even when it was dangerous.

Snivvians has a reputation for sociopathic tendencies similar to the Trandoshans, and they tried to control their genetics in order to curtail such tendencies. When twin males were born, one of them would invariably display traits of psychotic genius. Olsini Turpo was a middle-aged Snivvian tailor living in Bartyn's Landing, Lamaredd, c. 29 BBY; she was known to gossip about local politics.

Zutton is a Snivvian who was seen in Chalmun's Spaceport Cantina in the Mos Eisley city of Tatooine during the Rebellion era. 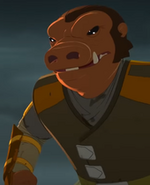 A blue one
Add a photo to this gallery
Retrieved from "https://aliens.fandom.com/wiki/Snivvian?oldid=184271"
Community content is available under CC-BY-SA unless otherwise noted.