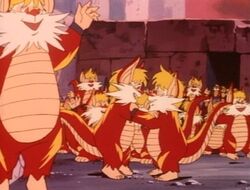 ThunderCats
The Snarfs are a species of reptile-cat creatures that are native to Thundera. On Thundera, they lived in the Valley of Snarfs.

Snarfs are intelligent, able to do tasks such as cooking and nursing. They are able to speak to people and animals. Their tails are strong, dexterous, and prehensile; they are able to stand on them. Snarfs apparently shed during a specific season.

Of all the species in the universe, they are the only species completely devoid of all evil capabilities. Due to their abilities, they are often servants to the Thunderian nobility.

When their home planet was destroyed, 43 of them escaped to a planet now called Planet of Snarfs, many more survived though and eventually found their way back to New Thundera. When Mumm-Ra recreated Thundera, he used the Snarfs to search for the treasure. They were freed by the ThunderCats.