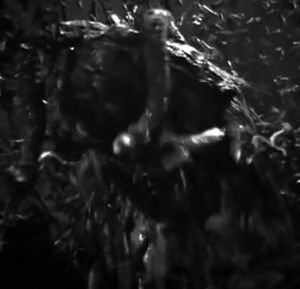 Slythers are predatory alien creatures occasionally used as pets and guard animals by the Daleks. The Black Dalek commander kept one of such beasts to guard the mines of Bedfordshire during the Dalek invasion of Earth in the 22nd century. These massive lifeforms possess a number of tentacles and clawed arms as well as a large maw; and can be quite aggressive. Although their origins are not explicit, it is possible that they originated as one of the many mutated beasts which formed on the Dalek's homeworld of Skaro as a result of radiation from the nuclear war against the Thals.

Retrieved from "https://aliens.fandom.com/wiki/Slyther?oldid=166187"
Community content is available under CC-BY-SA unless otherwise noted.