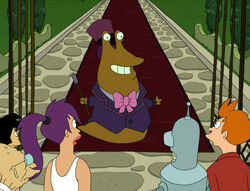 Futurama
The Slurm Worms are a race of sapient slug-like aliens, best known for producing and selling the soft drink Slurm.

All the galaxy's Slurm is produced in a factory on their homeplanet - planet Wormulon. However, this factory is a front, as the true secret of Slurm is that it is actually a fluid produced by the Slurm Queen, much the way honey is created by bees. This secret is closely guarded, for obvious reasons.

Little is known about this race's method of reproduction; however, there are two clues to work on: