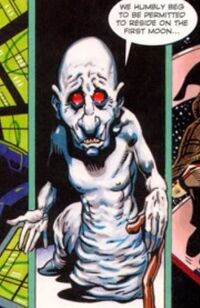 The Slithergees are a sapient species of blind, slug-like creatures, which seem to employ a passive-aggressive method of planetary conquest.

Although completely blind, the Slithergees possess a heightened sense of smell. Still, they often feel the need to employ other species (such as Humans) as sight guides to assist them.

Slithergees don't celebrate Christmas, but have a similar holiday known as Slime Time Solstice. Their architecture is said to resemble honeycombs.

In the year 3060, the Slithergees arrived on the Human colony world of Puxatornee. Despite their claims to be refugees whose homeworld had been destroyed, it was noted that they traveled in a huge battleship. They humbly asked for permission to settle on Puxatornee's first moon. From then on, due to interference from time travelers, there sprouted two different timelines, in one of which the colony's President Bailey was assassinated and the Slithergees were blamed for her murder. This resulted in war, which led to the devastation of Puxatornee.

In the alternate timeline, Bailey allowed the Slithergees to settle on the first moon, and from then they slowly started to inhabit the planet itself, living side by side in alleged peace with the Humans, but demanding increasingly draconian "inclusion policies" from the government, and claiming to be discriminated against if the Human leaders refused to comply. Over the next 30 years, the Slithergees grew on to inhabit over 9/10ths of the planet, but still regarded themselves as a minority. Due to their influence in the government, Humans who did as much as speak out against the Slithergees would be immediately punished for "hate crimes".

Retrieved from "https://aliens.fandom.com/wiki/Slithergee?oldid=180206"
Community content is available under CC-BY-SA unless otherwise noted.