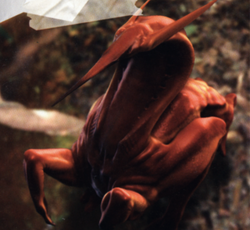 The slinger(Na'vi name: lenay'ga) is one of the oddest and most dangerous creatures yet discovered on Pandora. Growing in size up to 2.4 meters in height, this land predator/carnivore prefers a dense rainforest habitat, and its main food source is the hexapede.

When hunting, this creature moves slowly and silently through the forest ferns. When it senses prey, its muscular neck cocks back into striking position, then snaps forward. Its long, pointed, and winged head detaches and flies toward the prey as a self-guiding venomous projectile. After the head embeds itself into its target, the dart then emits a series of high pitched squeals. These squeals act as signals to allow the body (now sightless) to find the detached head. While still separated, the partners consume the prey until sated. The neck then bends down and a mesh of hairlike tendrils rejoin the head with the body.

Biologists were stunned to discover that their body and its dart-like head are not a single creature with a singular method of hunting. Instead, the dart is actually the 'child' of the body and will stay in the symbiotic relationship with its 'mother' until it is too large to perform its function as the dart. It then mates, detaches from the mother body and metamorphoses into a smaller, complete slinger with its own slinger dart head. At this time of youth, the slinger is a single color as different colorations are most likely created with subsequent growth. Left behind without a dart offspring, the mother-body is unable to feed itself and inevitably dies. In this cycle of renewal, each generation becomes the grain for the previous generation.

Na'vi hunters have been known to retrieve a dart that has been orphaned from its mother-body to use later as an effective weapon. Additionally, sap from a specific plant is also rubbed on skin that replicates the smell of a slinger to ward off would-be viperwolf attackers.

Retrieved from "https://aliens.fandom.com/wiki/Slinger?oldid=100097"
Community content is available under CC-BY-SA unless otherwise noted.