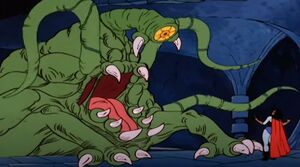 The so-called Sleeping Beast is a large, mysterious creature associated with (and perhaps created by) dark magic.

This creature spent centuries sleeping inside a pool within the House of Darkness, concealed in the Sands of Time, on planet Eternia. The Gar sorceress Shokoti planned to use its powers to conquer Eternia by enveloping the entire planet into a veil of darkness.

Retrieved from "https://aliens.fandom.com/wiki/Sleeping_Beast?oldid=187525"
Community content is available under CC-BY-SA unless otherwise noted.