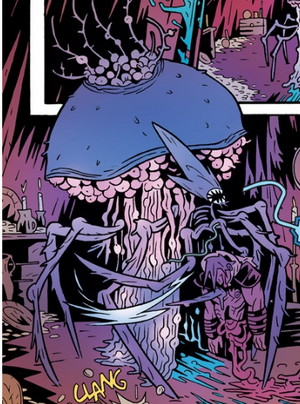 Slarpax is a warlord from another galaxy that attacked the Milky Way Galaxy. The D’Givani became aware of his presence rose to combat him. They succeeded in capturing him and his remaining forces, however while transporting them the D'Givani fleet ran into a cloud of rocks. The fleet crashed unto Earth, during the middle ages, in what would be northern Europe.

Slarpax escaped the confines of his prison during the crash and managed to make his way into the the encampment of the Rhund Army and slaughtered many.

He came to face to face with Aarek the Wolf King, King of the Rhund Clan. The alien warlord decreed that he claimed this world, but the Norsman ignore his jest. The two engaged in combat, Aarek losing a hand to the alien. Despite his wound the Norsman managed to kill the alien creature, though only its physical form. Slarpax had infected Aarek, poisoning his mind and body. Aaerk tried to fight Slarpax until he offered the human greater power that would reach the stars. Now fully controlling his new host, Slarpax set out to infect Aare's people turning them into his thralls.

He set two of his surviving warriors that survived the crash to salvage the D'Givani Master Control Key to use to commandeer one of the crashed vessels. They did not return, however he instead was met by the Sigrid, Princess of the Lombard Clan. He easily captured and decided to spare her as she brought him the very item his warriors sought. Instead he decided to make her a witness, bringing his army to bare on the Lombard Clan.

Hrolf eventually came to Sigrid's aid which fell within Slarpax's plans as the young Norseman brought him back his sword. However he did not expect Hrolf to crash an enhanced flying donkey into the Lombard Fortess, destroying his ship, and burying him under piles of rock. Slarpax managed to dig himself out but he was enraged at Hrolf for the act and sought to kill him. He and Hrolf battled each other, Slarpax proved to be the superior fighter and cut Hrolf's left hand. He had Hrolf at his mercy. But before he could dealt the final blow, Sigrid aimed a explosive arrow at him, critically injuring him.

Aarek from within the alien consciousness called out to his nephew Hrolf for mercy but Hrolf ignored the alien-hybrid cutting him down. Slarpax's minions soon lost cohesion and began exploding. Victory was certain until Slarpax managed to rise up and attack Hrolf with his mutilated corpse and infected him. He attempted to offer the same deal to Hrolf he made with his uncle Aarek to become the new Spider King. Hrolf resisted Slarpax's temptations and broke free from his influence. The alien warlord attempted to try again with Sigrid his words fell deaf to their ears as they dismembered his body.

A spider-like entity, Slarpax is a parasitic warlord, that infect other beings with fungus turning it into its mindless thralls. Should its current body be destroyed Slarpax is able to use a recently infected to continue its existence.

Retrieved from "https://aliens.fandom.com/wiki/Slarpax?oldid=173089"
Community content is available under CC-BY-SA unless otherwise noted.