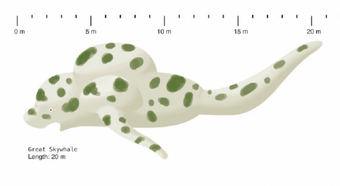 A Skywhale is a large, bilaterally-symmetrical, filter-feeder invertebrate that remains buoyant by the lift provided through hydrogen-filled bags within its body. Though it has no true backbone, it has a strong dorsal network of members that prevent the gas bags from ripping apart. It has a sideways-openning mouth.

The ancestor of the skywhale was a hyperthermophile that adapted to the photic zone of the atmosphere where larger quantities of aerial plankton could be found for food.

It has even established symbiosis with many forms of skyplankton, by allowing it to grow on its skin, preventing parasitic forms of plankton to infect the Skywhale.

Retrieved from "https://aliens.fandom.com/wiki/Skywhale_(Orion%27s_Arm)?oldid=184962"
Community content is available under CC-BY-SA unless otherwise noted.