Alien Species
Register
Don't have an account?
Sign In
Advertisement
in: Omnivores, One Piece Universe, Sapient Species,
and 4 more 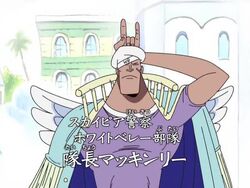 One Piece
Skypieans are the people who come from Skypiea and live on Angel Island and other islands in the sky. The Skypieans are mostly a non-aggressive race who live peacefully on the Sky Islands. They use dials for everyday use such as cooking. They have wings similar to the ones found on the backs of the Shandians. They greet each other by saying Heso (which is Japanese for bellybutton) often while putting their hand against their head and sticking two fingers up.

They follow the Leadership of their ruling governor (which they call 'God'). They rarely question the actions of their ruling cast, even when faced with the fearsome Enel. To the Skypieans, the ground from the Blue Seas below (which they refer to as 'Vearth') is sacred as plants do not grow without it in Skypiea. Because of their devotion towards their ruling cast and their value of Vearth, long ago their ancestors entered a war with the Shandian over their homeland, one which lasted 400 years.

They train their hair to grow like the antenna of an insect from a young age, using sticks in their hair to support the end. Their wing style is very different from Bilkans, styled closer to the Shandian wings. Their wings tend to have shorter feathers that are slightly less in number than a Shandians, often these feathers are thicker and more rounded. They are so close that at times the wings appear to be identical.

The Immigration to the Blue Star[]

Skypieans originate from the moon, along with the Bilkans and Shandians leaving behind their friends the Spaceys. When resources on the moon were used up they, along with the Shandians and Bilkans, moved to the Blue Seas. At some point the three races separated and became what they are today.

Song of the Holy Land[]

Skypiea was "blessed" when the homeland of the Shandians, was blasted up into the sky. Their God immediately claimed the land as his home and a bloody war began between the two races.

Several years before the current storyline of One Piece, their current God, Gan Fall was overthrown when Enel, who had come from Bilka took over Skypiea. Enel ruled skypiea with a tyrannical hand, bestowing heaven's judgement on those who committed sacrilege against him, causing the skypieans to live in constant fear of him.

After the struggles of the Shandians and the Straw Hat Pirates against Enel, the Skypiean/Shandian war came to a close with the ringing of the Golden Bell of Shandora. With no home to return to, the Skypieans entered Skypiea and both sides of the war stood and wondered if things could really be fixed after 400 years of fighting.Later they are seen together celebrating with Norla and the Straw Hat Pirates.After things had settled Gan Fall and the chef of the Shandians discussed who should lead the united people. Gan Fall reluctantly becomes the God of Skypiea again.