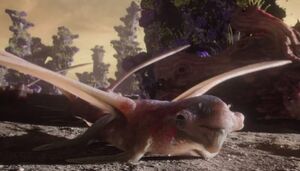 Like their name indicates, Sky Grazers are flying herbivores which feed on airborne plant seeds, and spend their entire lives soaring through the air currents. Landing is fatal to them, as they can't support their weight on the ground. However, the high gravity of their home planet results in a much thicker atmosphere, which facilitates flight significantly.

Sky Grazers appear to be vertebrates, with internal skeletons, three-part mouths, and six wings. The first and third pairs of wings are comparatively small and used for steering and maneuvering, while the much-larger second pair provides lift.

The males of this species have larger and heavier tails compared to the females, which makes flight more challenging for them. The female selects the male who proves himself strong enough to keep up with her speed in spite of this physical disadvantage. After mating, the female lands on a high peak to lay her eggs and die. The infants struggle to avoid predators after birth and launch themselves off the steep cliffs to fly away.

Retrieved from "https://aliens.fandom.com/wiki/Sky_Grazer?oldid=193880"
Community content is available under CC-BY-SA unless otherwise noted.