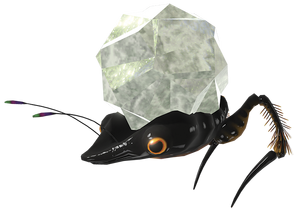 Pikmin
The Skutterchuck is a insect-like, two-legged species that was first found and discovered by Koppaite ranger Captain Charlie. It was rediscovered by Captain Olimar during his Sparklium expedition on the same planet.

Skutterchucks are fairly medium-sized, just large enough for a adult Koppaite to ride on top of. They have a black wafer-like body structure with an orange underside, and a single set of insect-like legs to support its body. These legs are surprisingly strong in spite of not being cauterized for proper equilibrium as with other animals.

Recent studies had shown these creatures as peaceful herbivores, their diet primarily consisting of moss and other plant matter.

These creatures get their name from their habit of scooping up large rocks, or in some cases live creatures or other objects similar to Dweevils. Rather than just holding them though, they use these as projectiles against trespassing enemies or rival Skutterchucks. Interestingly, many specimens have been found with orbs of crystal nodula as their preferred weapon of choice, but will resort to standard rocks of Pikmin if needed. To have such a steady supply, it is discovered that they share their habitats with juvenile Calcified Crushblat, the crystal nodula made from their discarded shells.

A special colony of Skutterchucks were discovered during the Sparklium expedition by Captain Olimar that, while not physically drastically different, do show different behavior. These are smaller than standard species, about Pikmin-sized, and are brown in coloration. The front of their heads are more rounded as well. They are also more sociable, found in patrolling troops of four individuals at a time.

Unlike surface Skutterchucks, these subterranean Skutterchucks are able of walking on walls and ceilings, dropping their projectiles on threats below it instead if chucking them forward like surface species do.

Olimar theorised that it's the female ones in this subspecies carrying the crystals and that males carry rocks, though he admits that he has no evidence to back it up.