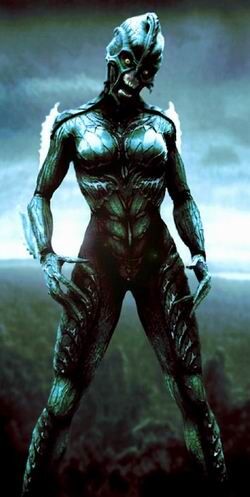 Farscape
The Skreeth are a sapient humanoid species of extremely dangerous creatures.

Skreeth are an all-female species of reptilian humanoids with armored green skin, a lipless mouth with sharp teeth, yellow eyes and claws. Their physical abilities make them extremely deadly predators. They can camouflage themselves by becoming invisible, run at superhuman speed, and are extremely resistant to being injured by physical weapons and bullets. They also have psychic abilities that allow them to scan the minds of beings they're in physical contact with, probing them for knowledge.

Retrieved from "https://aliens.fandom.com/wiki/Skreeth?oldid=173934"
Community content is available under CC-BY-SA unless otherwise noted.