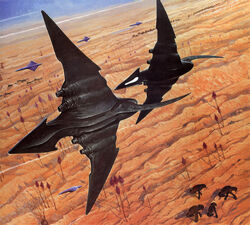 Expedition
Skewers are monstrous flying animals, possessing a wingspan of approximately 15 meters (49 feet) and when combined with their sleek body structure and wide range of habitat, prove them to have no rivals more potent than they. They are the largest aerial predators on all of Darwin IV, and are both prey and predator to the planet's near-sapient species, the Eosapiens. Even Arrowtongues are not beyond vulnerability to their swooping attacks. Their species generally travel in mated pairs, but can be found less frequently in small, flying pods, using the planet's strong air currents to help migrate them from pole to pole.

Skewers are reminiscently jet-like in shape, and like presumably all other predators on their world, hunt by sonar. They hunt in small packs, and use a huge, curved hollow nasal-lance protruding from their heads, which they use to impale and disembowel their prey. Once prey has been impaled, they go into a steep climb to offset the shift in their center of gravity caused by the impaled prey. They then proceed to inject their sometimes still-living prey with digestive enzymes as any other liquivore would do, and soon begin sucking the corpse's fluids out of its now-lifeless body. Each Skewer will alternate between feeding, and dropping their prey, letting other members of their pod to feed as well. This performance appears to be almost playful, and does not stop until the prey is finally completely drained of all its fluids. Skewers have been known to kill for sport, and even for fun. The shriveled husks of such victims can be found virtually everywhere upon Darwin IV's surface.

Their species maneuver through the air by propelling themselves through the use of internally created methane gas, which is then combusted within the four jet-pods located on its wings, in a way again reminiscent of modern-day jet propelled aircraft of Earth. This is coupled with the movements of their wings. They do not flap but squeeze (similar to accordions), shifting their shape in order to shift flight patterns. With these two adaptations, they are capable of traveling at speeds of up to 322 kilometers per hour (200 miles per hour), making them likely the fastest species on Darwin IV as well as the largest aerial predator.