Alien Species
Register
Don't have an account?
Sign In
Advertisement
in: Masters of the Universe, Characters, Males,
and 10 more 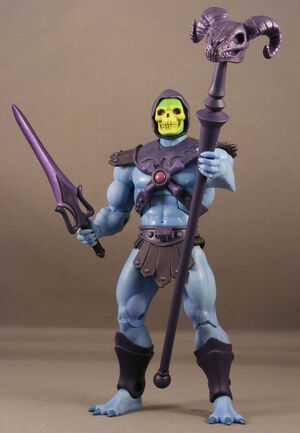 Alan Oppenheimer
Frank Langella
Campbell Lane
Brian Dobson
Mark Hamill
Skeletor is a dark sorcerer from Eternia. A sinister humanoid figure with blue skin and usually dressed in a hooded attire, he earns his name from his bare-bone face which resembles an animate Human skull. He is also a former member of the powerful multi-species affiliation known as the Evil Horde, but left the organization after betraying his master Hordak in a mission to kidnap Princess Adora of Eternia. After that, Skeletor has assembled his own group of loyal and not-so-loyal followers to attempt to conquer Castle Grayskull and the secrets to the infinite power source it possesses for being located in the exact center of the universe. However, his plans have been repeatedly foiled by He-Man and the other Heroic Warriors.

Skeletor is the tyrannical ruler of the dark side of Eternia, operating from his lair on Snake Mountain. He prides in his evilness and his perceived astuteness, and is usually ambitious but optimistic about his plans. He shows little tolerance towards failure and incompetence and usually gets mad at his minions when something goes wrong. A student of the occult; he has mastery over magical powers and his knowledge has only increased after being tutored by Hordak. He carries around a magical weapon known as the Havoc Staff to perform his spells, and is capable of teleporting at will. Besides his advanced magic, he has also displayed technological knowledge which allows him to build various machines and contraptions; and is skilled at physical combat as well. He has a pet Dylinx named Panthor.

Although Skeletor's origins are secret to most people, he was actually born as a half-Gar warrior and sorcerer named Keldor, who lost his face in an accident when he attempted to attack his half-brother Randor with acid; only to have the acid splash on the future-king's shield and hit Keldor instead. To save the life of his student, Hordak then merged Keldor with an extra-dimensional demon, thus creating Skeletor.

Skeletor, as seen in the original animated series

As seem in the live action movie