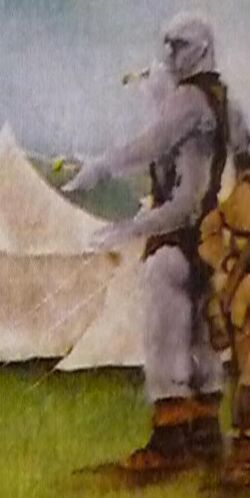 Majipoor Series
Skandars are large, hairy sapients who reach an approximate height of around 2.5 meters (7.6 feet) tall. They are often stated as having the general outlook of a bear, a species indigenous to the planet Earth. Powerful creatures with two pairs of arms, they are known for their strength, quick reaction time, and coordination. Skandars evolved on a frigid world, and as such are in fact quite uncomfortable living in the tropical Majipoorian heat, although they are not given to complain. Their fur ranges in color from various shades of light-blue and blue through shades of gray and even pure white.