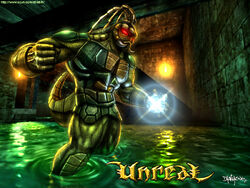 Unreal
The Skaarj (pronounced "scar") are an advanced race of aggressive beings generally living in a highly tribal society.

The Skaarj have green/yellow/blue skin, tusks of varying lengths, and are generally reptilian in appearance, though their lifecycle is more closely related to that of insects.

At the head of any given Skaarj clan is a Queen, similar to the Xenomorph Queen, who lays eggs from which a four-legged spider-like creature (termed a Pupae, though the creature could perhaps be better defined as a Larvae or Brood) eventually emerges. These Pupae are vicious and voracious in the extreme, already displaying the leaping ability and mandible tusks common to all Skaarj (as well as sufficient intelligence to conceal themselves and coordinate surprise attacks, and the ability to cling to virtually any surface), and provided adequate food supplies of unknown configuration, will eventually grow into the Skaarj as they are commonly seen. No female Skaarj besides the Queen have been found; it is assumed, by analogy with terrestrial species of social insects (such as honeybees), that a Warrior (which serves otherwise as a sort of elite guard) will be chosen to mate with the Queen as necessary (fulfilling the function of a drone), while the Troopers act as workers and protect the outer reaches of any given Skaarj territory.

It also appears, based on fundamental differences between Warrior, Trooper and Queen physiology (such as the longer tails and 'hair' spines of a Warrior versus the stockier build, shorter tails and natural 'armor' of a Trooper), that a Skaarj's type is determined at birth rather than being retroactively assigned.

The Skaarj also command a subspecies of powerful mutations termed Brutes; these are commonly produced in varying degrees of potency, and little resemble the Skaarj but for a pair of small tusks; however, it is assumed that Brutes are artificially produced from the same genetic stock as other Skaarj, and therefore warrant a mention. The relation of the creatures known as Slith to the Skaarj race are unknown; they share the distinguishing mandible tusks, but they display little or none of the intellectual sophistication of the Skaarj, instead resembling predatory amphibians in their behavior. It is possible, given the Slith immunity to various forms of Tarydium waste, that the few Slith so far encountered have been the results of Skaarj eggs which reached maturity in toxic and mutagenic environments. The one other distinguished variant of the Skaarj species has been termed the Warlord; this seems to be a further developed form of the Skaarj Trooper, as evidenced by his natural 'helmet' and build. The Warlord could be seen as the Trooper analogy to the Queen, which is essentially a much more powerful Warrior, in which case there is an argument to be made for a Skaarj hive being constructed around a Queen-Warlord pair, but no evidence has been found to support this theory. Instead, the Warlord is often assigned to guard areas of particular tactical importance and/or physical size, as its natural wings and immense upper-body strength allow it to maintain a marked advantage over ground-based foes, and cover great distance at speed.

The Skaarj are highly intelligent, fast, strong, and their clans usually remain solitary, perhaps due to conflicts in code or competition. The clans have shown a significant amount of cooperation in the Human/Skaarj wars, however. Most Skaarj consider all other races to be inferior, and that it is the destiny of the Skaarj race to rule over all others. Many races such as the Nali, Krall, and Izarians have been enslaved by the Skaarj, and are technologically inferior. Rivals of the Skaarj include the Mercenary and Humans, who generally have technology at par with the Skaarj.

As well as the separate clans, the Skaarj Empire was formed with the goal of ruling the universe. After enslaving and destroying a large number of alien species the power hungry Empire moved onto the humans. First contact with this Empire came when the New Earth Government attempted to recover the crashed prison vessel, the Vortex Rikers. Over a full year the humans and the Skaarj Empire fought a large number of battles, at areas such as Avalon and eventually Earth itself. This began the "Seven Day Siege" in which the Skaarj fleet surrounded the Earth and attacked. A vast majority of the Earth's population were killed and the NEG struggled to hold the invaders off. Eventually, on the final day, the NEG Commandos assaulted the Skaarj Mothership and destroyed it from the inside. The Skaarj were sent into full retreat and the human race lived to see another day.

Since the Human-Skaarj war, the Liandri Corporation experimented with Skaarj/Human hybrids in their Grand Tournament. In the latest tournament, actual Skaarj from the deadly Iron Skull Clan have participated, generally holding that they will indeed one day conquer humanity, and the Tournament gives them the opportunity to kill humans in vast numbers until that day arrives. The Black Fist clan opposes the Iron Skull clan, who are their sworn enemies, and members of Black Fist, Mekkor and Skrilax, are currently enrolled in the tournament, hoping to battle the Iron Skull.

A Skaarj Warrior's main weapon is called a Razik, and consists of two (presumably surgically attached) wrist-mounted blades on each hand, similar to a weapon used by the Yautja. The Razik also is able to fire electrically charged shots of energy, which form between the blades (possibly acting similar to the rails of a mass driver) and fire in pairs (though this may possibly be a deliberate choice of tactics rather than a limitation of functionality). The weapon seems to be modeled after the myriad of natural blades which adorn the dorsal ridge of the Skaarj Queen, coupled with her ability to discharge a flurry of similar energy projectiles.

Skaarj Troopers are not fitted with Raziks, instead opting for more conventional weaponry, either as a function of Skaarj tribal culture or an actual physical inability due to structural differences to the Warrior. They bolster their defensive capabilities with an energy shield, commonly seen (when not in use) as a small plate, decorated by a glyph, worn on the back of the troopers' off-hand. When activated, the device projects a circular and softly curved opaque field of energy, similar in function to an archaic buckler; it is capable of withstanding most known physical attacks, including energy weapons and projectiles. The device only repels attacks from one direction at a time, however, and does not impede the transfer of inertia.

The only self-contained Skaarj projectile weapon seen thus far, the RazorJack is rumored to be a hunting weapon, adapted for military purposes. It consists of a vaguely bat-shaped platform which houses two blades, similar in design to those of the Razik, which are stored when the weapon is not in use and can presumably be used for hand-to-hand combat in a manner comparable to a bayonet. Between these two blades is situated a third, rotating, three-pronged razor-edged projectile, similar in design to an archaic shuriken, presumably suspended there by electromagnetic force. When the trigger is pulled, the razor undergoes a dramatic increase in rotation speed before being launched from between the two bayonet blades. It is assumed that the blades also house a variant of the magnetic projectile guiding system used in the Razik, due to the possibility of a technique called 'gesturing': by nudging the device in a certain direction after firing, the razor's trajectory can be very slightly altered. It is common practice to tilt the weapon on its side before attempting to gesture a shot, using one bayonet blade as a rudimentary ironsight, as the weapon lacks any other form of visual targeting aid. The high velocity and sharp edges of the launched projectiles allow a skilled operator to achieve decapitation and/or dismemberment at short to medium range. Ammunition is commonly delivered in the form of rectangular cases of razors, decorated with glyphs and featuring a self-extracting delivery system that seems to be proximity-triggered. It has been observed that the razors themselves are fired at such high speeds (both of rotation and forward velocity) that any contact with a reasonably solid object results in a ricochet, making the weapon as deadly to its wielder as to their target in a narrow place. The razors cannot withstand multiple such impacts, however, and their structural integrity is compromised after a few 'bounces'.

Curiously, Skaarj Troopers are rarely, if ever, seen wielding a weapon that seems to have been specifically designed to help them match the Warriors in combat potential.

The Skaarj seem to have developed a form of aircraft similar to terrestrial fighter-bombers. These craft are highly angular in design, consisting of a diamond-shaped one-person cockpit with a similarly formed nose, triangular thruster nozzles, sharply slanting wings and prongs on the wings that may house additional weapons systems. These craft are able to achieve speeds of nearly 1400 km/h in atmosphere, and have been seen to fire pairs of air-to-ground missiles with considerable accuracy. The craft are presumably equally effective in deep space combat, as they appear to lack air intakes or other signs of reliance on atmosphere to function. Larger variants have been sighted, presumably for use as heavy support craft.