Alien Species
Register
Don't have an account?
Sign In
in: Doctor Who Universe, Sapient Species, Races of the Sol System,
and 11 more 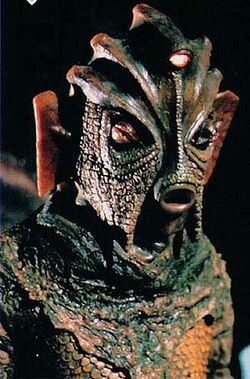 Taller than the average Human

Malcolm Hulke
Silurians is a name attributed to a sapient humanoid species which evolved on the planet Earth, long before the dawn of mankind.

They are bipedal reptilianoids with a humanoid erect posture and bodies covered in scales. Their heads sport a five-pointed crest, a pair of long flaps on the sides, a pair of large eyes and a smaller third eye on the forehead. Their mouths seem toothless and appear more fish-like than reptile-like in appearance. They usually speak in deep, guttural voices.

The Silurian third eye is able to flash bright red lights that can stun, hypnotize or even kill. It also appears that they can control their technology using the third eye. Silurians are cold-blooded and need a hot environment for comfort. They are also way more resistant to cosmic rays radiation than Humans.

The Silurians, along with their aquatic cousins the Sea Devils, were the original dominant native species of Earth, at least from the late Palaeozoic through the early Mesozoic era (as evidenced by them having a world globe that features Pangaea: the super-continent that only existed during these eras) until the time of the early human ancestors; whose genes were modified by them in hopes of creating a new food source.

At some point during the Eocene period, they discovered a small planetoid coming in the direction of the Earth, which although missing an impact, would still probably pass close enough to rip out the Earth's atmosphere. As a result, their entire civilization was driven to the subterranean and put into stasis chambers for millions of years. Unfortunately, their reactivation mechanisms didn't work properly and they remained in stasis for much longer than planned; raising again to find a world overtaken by mankind.

Silurians are not a particularly aggressive species, but are susceptible to the same kinds of emotions as humans, including fear and racial pride; both of which ended up leading them into a war to destroy humanity and reclaim their planet. One of the first Silurian colony was waken up accidentally during tests with an atomic reactor in Wenley Moor, UK. While their leader was convinced by the Doctor to try to co-exist peacefully with humanity, he was murdered by a younger and more radical individual which believed war was the only solution. Being in greater number and assisted by the Doctor; which found a cure to the disease purposely spread by the Silurians; humanity won the battle and the Silurians and their caves were destroyed. However, this was later found to have been only one of hundreds of sleeping colonies, of both Silurians and Sea Devils, many more of which would be awake in the following decades and likewise engage in armed conflict against humanity. At some point in the 26th century, peaceful coexistence was finally established between Humans and "Earth Reptiles" (Silurians and Sea Devils).

Although the Doctor himself admits that the name "Silurians" was a misnomer, and that they do not come from that period, it is still hard to consolidate the different aspects known about Silurian history to deduce which period of time they actually come from.

For instance, the globe shown in Doctor Who and the Silurians confirms that their civilization was around about 250 million years ago, at the time of the super-continent Pangaea. However, they also explicitly claim to have been familiar with distant human ancestors, which they refer to as "apes" and considered as pests. This is more consistent with the Doctor's proposal that they come from the Eocene (about 45 million years ago); when although true apes did not exist yet, there were at least primates (lemurs and monkeys), which could perhaps be referred to by such name in the absence of more advanced forms (especially if translation conventions from the Silurian speech are to be considered). The creature the Silurians use as a guard of their caves - a huge reptilian beast which we are led to believe is a dinosaur - was unlikely to exist in the Eocene, though, and would feel more at home in the Triassic or possibly the Cretaceous.

Taking all these aspects together, it is reasonable to suppose that the Silurians evolved sometime around the Permian, in Pangaea; and survived through the Mesozoic era until the Eocene period, when they finally went underground. The supposed catastrophe predicted by them (and which never actually happened) at the time and that caused them to go into hibernation, could not, in any case, have been the Earth's capture of Luna like the Doctor proposed; as that event happened many billions of years ago, by far preceding all periods mentioned above, including the Silurian.

Neither peaceful nor belligerent by nature; the Silurians only attack in circumstances they interpret as threats to themselves and/or their civilization. Silurian society is ruled by a Triad. They are a scientifically advanced species, with numerous technological achievements. They have domesticated at least one kind of large reptilian predator from their time, and kept some individuals in hibernation along with themselves.

Silurian technology includes the ability to genetically modify species; including a specially created virus that would keep the early ape population in check, preventing them from devouring the Silurians' crops; and a large mutant beast known as the Myrka.

In the Cthulhu Mythos crossover novel All-Consuming Fire by Andy Lane, it is stated that some Silurians worship the Great Old One known as Azathoth.

The Silurians are close relatives and allies of an oceanic humanoid race known as the Sea Devils; which also had their civilization put into hibernation around the same time as their land cousins. Unlike the Silurians, Sea Devils do not possess a third eye, and are also easily distinguished by their wide beaked mouths and webbed feet.

As the Silurians seen in Doctor Who and the Silurians differ in appearance slightly from those of Warriors from the Deep, and heavily from those seen in the new series; it is reasonable to suppose that there are a number of subspecies (or at least ethnic subgroups) besides the Sea Devils (which are different enough to be considered a separate species altogether). This is consistent with the idea that the Silurians inhabited the Earth continuously over a long period of time; leading to the evolution of many different forms due to genetic drift or possibly due to purposeful genetic alteration.

In the 21st century, the 11th Doctor encountered a different kind of Silurians with more human features and lacking the characteristic third eye. He refers to them as Homo reptilia; which is Latin for "reptile men"; not a valid scientific name for the species since they aren't actual men; unless he meant Homoreptilia as a single word denoting the genus, and left out the species, in which case it could be taxonomically valid.

The Silurians found by the 11th Doctor were also the only kind seen to use hand weapons (since they didn't possess a third eye and were therefore incapable of using its deadly flashes for attack). These guns closely resemble those used by the Sea Devils; raising the possibility that these Silurians might have been more closely related to that race than the ones encountered by the 3rd and 5th incarnations of the Doctor. They could have been an intermediary species between the two, or perhaps even a race of hybrids; explaining their non-Silurian mouths and absence of the third eye.